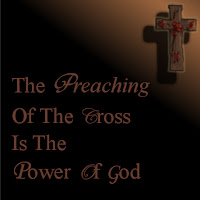 Have you ever been a part of a group of believers who believe they need to set the atmosphere right for the Spirit of the Lord to show up?


Some dim the lights, some light candles, some paint light colors and hang certain decorations on the wall, as do psychologists, to altar the mind. The list goes on and on in today's church to "try" to get the Lord to show up. Some youth groups have black lights, posters, games, and all sorts of attractions to try and get TODAY's teens in the right "mind set". This is unfortunate because THE ONLY WAY THE LORD DRAWS anyone whether it be a teen or the elderly, IS BY HIS TRUTH.

I know the excuse is that we need to do whatever it takes to get folks in church, but that again is not bible my friends. We are called to take THE GOSPEL to the ends of the earth, not try and get everyone in "our" church (building). When they do show up, if the TRUTH won't keep them, they must return from where they came. The Lord chose the foolishness of preaching to Save those that are Lost AND IT IS the preaching of the cross that is the power of God (1 Cor. 1:18) not anything else we may think.

Note in Luke 24:44-47 how that Jesus opened the eyes (understanding) of His followers. He revealed the scriptures that they are about His coming to suffer, die, and be raised from the dead. Wow!! You see, this is the full counsel of God. Only for those who have ears to hear, don't you know that you were baptized into His death (Romans 6:3). You as a believer were baptized into His Victory. Through His death you were justified and through His death He crushed the head (authority) of Satan. Satan only had a grip on man because of sin, BUT WHEN THE BLOOD POURED OUT!!! He (Satan) was defeated and sin was atoned for. HALLELUJAH!!! PRAISE THE LORD!
We are praying for you and your house. Don't let another day go by that you value what everyone else thinks. Find TRUTH and FOLLOW IT.
Pastor Curtis

Wow, this is incredible! I've been thinking about these very things. I feel like my church is exactly like this:trying to become more like the world without even realizing it, in order to attract more people. But this is not Biblical. The Bible teaches against conforming to the world. Thank you for sharing this.