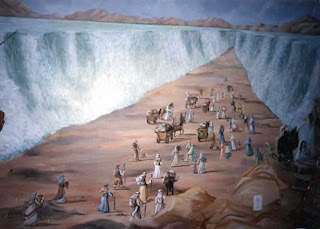 It is so awesome to know the same God who opened the Red Sea for His people to be able to escape,will do the same for His people today. Not only did the Lord make a way out right through what previously appeared to be their soon coming end (the Red Sea), but along with their deliverance through the sea, He destroyed the enemy utterly. Wow!!!

Exodus 14:22 says the waters they once viewed as their soon coming death were made walls for them so they could travel through on dry ground.

As everyone stood and watched Jesus on the cross and began to think this is the end, this is death, this is great loss, while the entire time the opposite was much True. It was NOT the end, BUT THE BEGINNING, not just death, but death that would bring LIFE, not loss, but the greatest gain one could ever know.

It is very refreshing to know the WORD of GOD proclaims that
"if God spared not His own Son, but delivered Him up (the cross) for us all,


how shall He not also


WITH HIM give us freely all things."

The key is WITH HIM. This is the knowing that we were crucified with Him and if we are planted together in the likeness of His death (identification with His cross) we will walk in newness of life. The reason so many Christians can't get past their problems is because they don't know they have been baptized into Christ's death, (Romans 6:3) NOT His glory, or anything else. His death is what justified and what brings newness of life that we all search for. Praise God.

God bless you and remember Revival is coming in a great way, but it will only be ushered in through One Way and that is the preaching of CHRIST and HIM crucified.